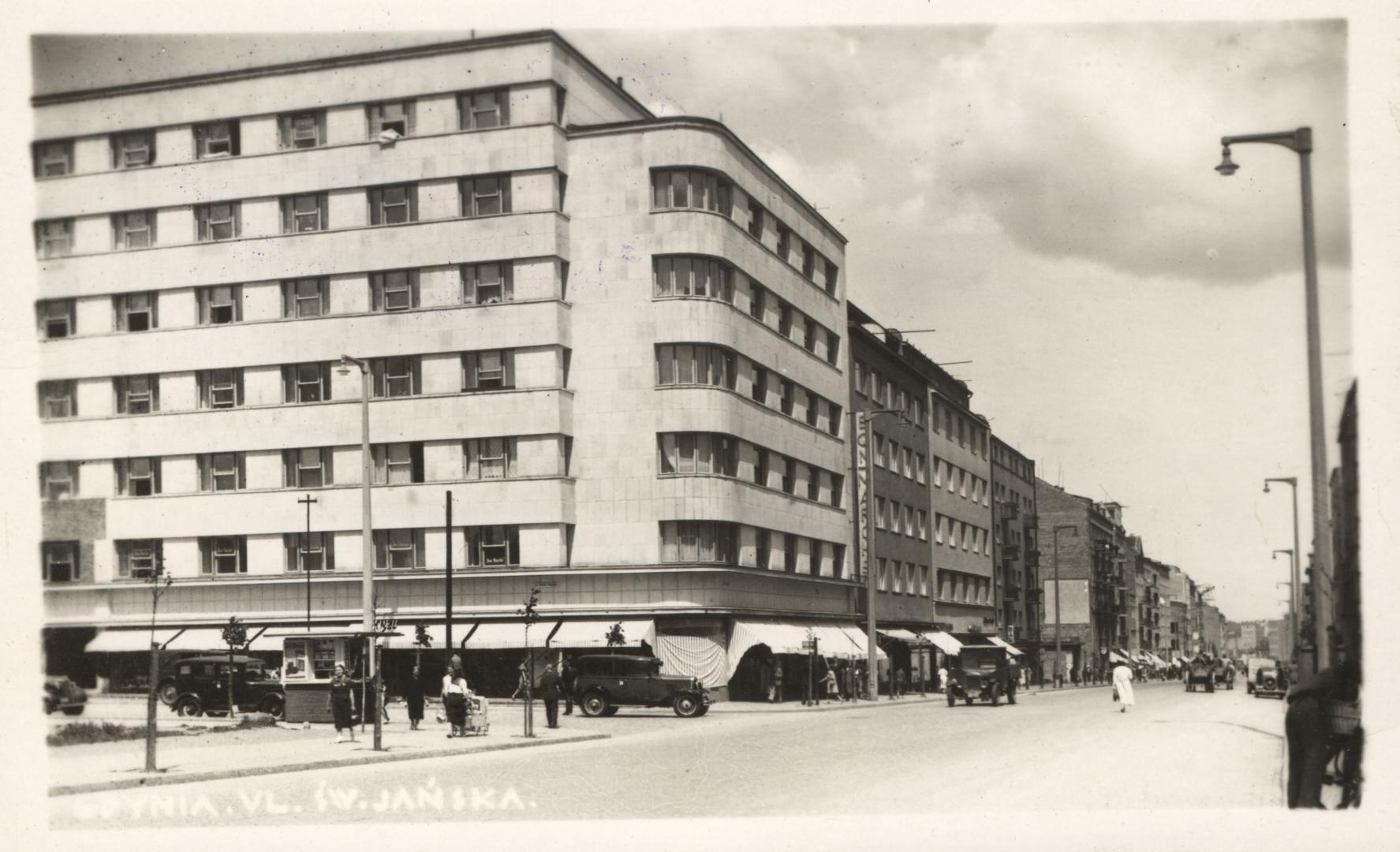 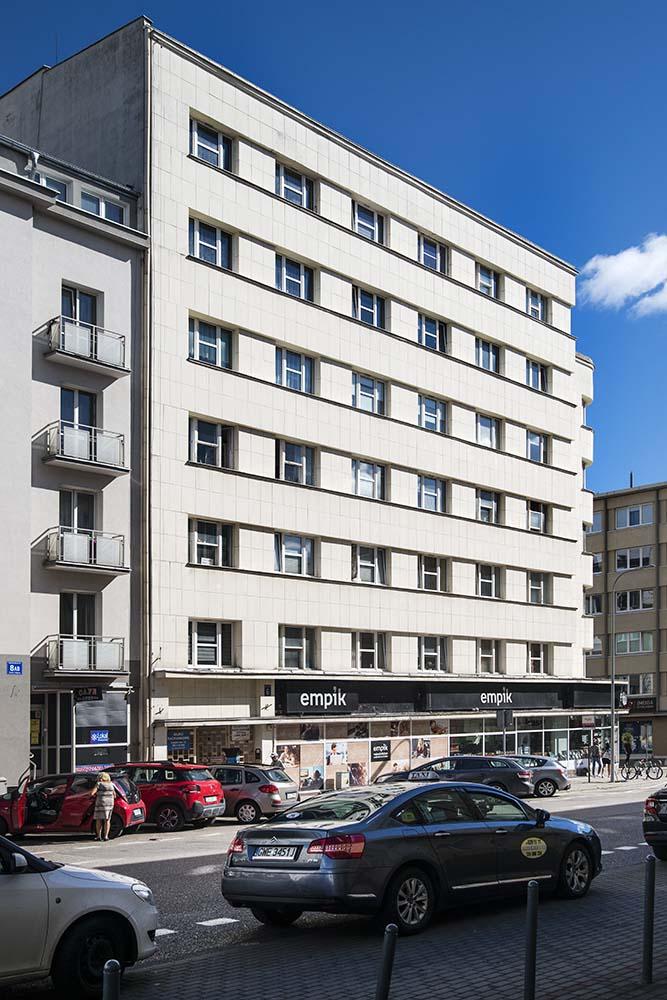 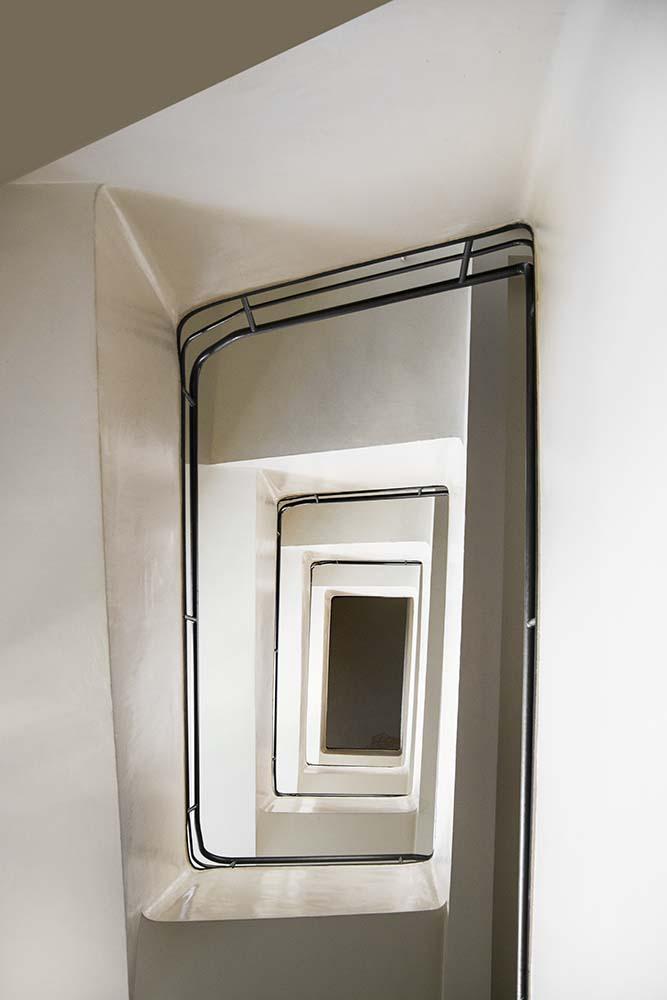 The tenement house was designed for a couple of American citizens – Albin and Maria Orłowski. The building was supposed to accommodate both apartments and a department house which was located on the ground floor.

Its extremely modern shop window which was almost entirely glazed in stretched along the entire ground floor. The truly American-style Bon Marche department store was located there.

The building’s corner location at the junction of Gdynia’s most important street Świętojańska and Żwirki i Wigury made it possible to display the entire body of the building.

It is divided into two parts – the six-storey one, which you can see from Świętojańska Street and the eight-storey one in Żwirku i Wigury Street. The first, lower part is emphasized with a beautiful, rounded corner in which there are windows. It stands out slightly over the frontage of Świętojańska Street’s buildings. The other, taller one is characterised by very rhythmically arranged lines of large windows, which are emphasized with mouldings below and over them. These were vertically sliding windows, which was typical of American architecture of those days. The use of these solutions was a definite result of the owners’ descent and the desire to bring the building’s form closer to American department stores. Modernity is also a distinctive style, which is expressed in the use of bright limestone facing. The material originated from the Kunów vicinity in the Opatów District.

The two structures of the building are connected by the double moulding which runs just over the ground floor development. It is the visual ribbon which connects the building’s two façades and at the same time highlights the commercial ground floor.

In the facility, there are two entrances and two staircases. The entrance in Świętojańska Street is slightly recessed from the face of the building and a bit higher than the street level – several steps lead to it. The slight elevation of this building’s part results from the street’s northwards tilt. The commercial part on the ground floor still serves its function and is in use today. Thanks to this, the interior is adjusted to contemporary business standards and safety requirements.

When you enter the first staircase, you immediately see a vestibule with several steps decorated in contrasting colours and materials. The treadboards are made of black terrazzo while the stair risers are covered with white tiles, which creates a beautiful and strong contrast. In the further part of the staircase, on the floor we can see the same colour combination – closer to the walls there is a black terrazzo stripe which is a composition frame for the tiles arranged in a rectangle. Its frame is made of white tiles while the filling consists of grey tiles. The same motif can be seen on the landings. The staircase is decorated with a balustrade with a black, cast-iron handrail which brings the passenger ships’ and vessels’ handrails to mind. The clearance between the stairs’ handrails is also beautifully highlighted with the same contrasting colours – black steps and white, solid balustrade as well as white walls. The large windows which face the inner yard provide the entire staircase with plenty of light. On each floor, there are four apartments with wide, doubles door leading to them.

The other staircase’s entrance is located near the gateway, in Żwirku i Wigury Street. This part of the building is smaller and slightly less elegant, with single apartment doors. On the walls, there is a grey terrazzo dado. Stairs are made of the same material. Black elements make this place more distinctive too. The balustrade’s wooden handrail is black. The gaps between grey terrazzo panels were marked with black too. The staircase’s space is filled with light from the tall windows. Both staircases have had lifts since the building was put in use.

The tenement house which accommodated the Bon Marche department store was designed according to the highest standards, which is, among others, proved by the quality of the building’s interior’s finishing materials. Their timeless beauty is proof of the architect’s artistry and the owners’ fantastic taste. 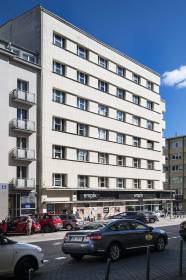 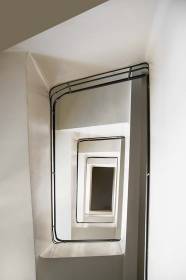 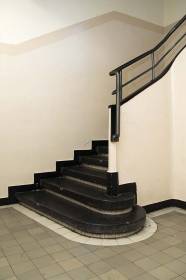 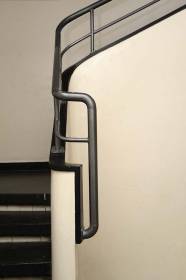 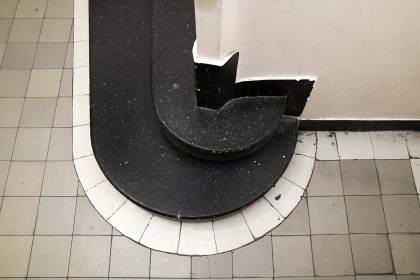 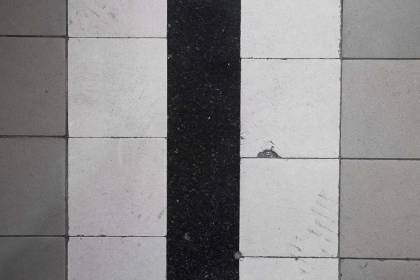 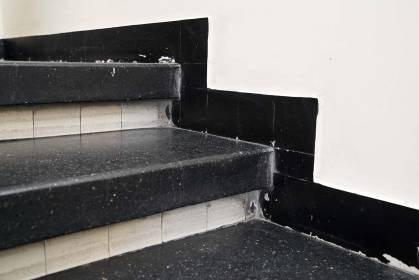 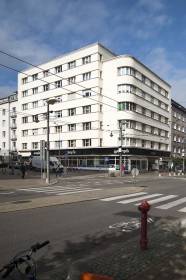 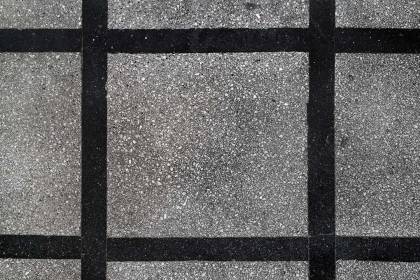 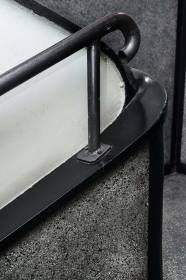 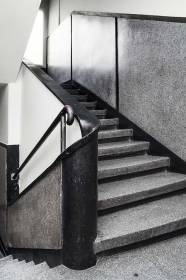 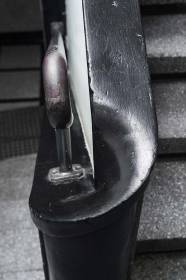